What are Solar Flares?

Solar flares are the solar systems largest explosive events. Have you heard of them? 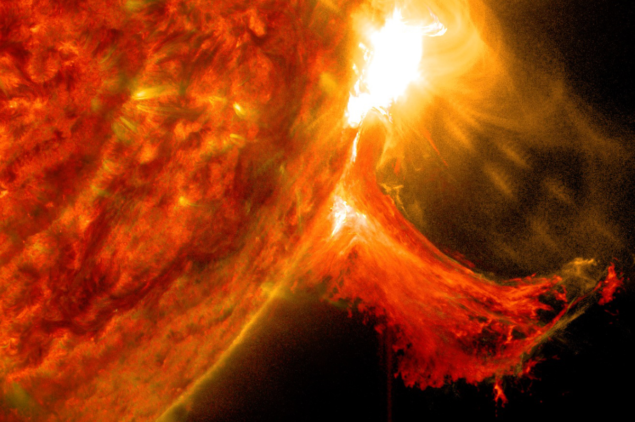 On October 28, 2021, an X1-class solar flare was released from the sun that caused a temporary radio blackout. These are the most powerful explosions in our solar system, but what exactly are they?

Solar flares are usually described as bursts or explosions of radiation and magnetic energy from the sun. They are made up of high-energy photons and particles. When magnetic fields in the sun become too tangled and they finally snap which causes the explosion, they get tangled as the sun rotates over time. When they burst, the solar flare takes only eight minutes to reach earth.

Many worry that solar flares will hurl into the earth and destroy life, but that is not possible. Solar flares do affect our earth sometimes, but the heat explosion will never reach past the earth’s atmosphere. We are shielded by this atmosphere and our magnetic fields.

In sunspot regions, the magnetic fields help form solar flares. Sunspots are in the photosphere of the sun that is visibly darker areas, they seem like they would be hot, but they are cooler than the rest of the sun. They are around 6,500 degrees Fahrenheit while the sun is about 9,940 degrees Fahrenheit.

As solar flares travel through space they are 20 to 2000 kilometers per second.

Solar flares are not visible from the earth but can be seen with special instruments. The sun usually takes the spotlight and shadows over the flare.

In 2014, there was a humongous sunspot that would release multiple solar flares.

There are a couple of different types of solar flares.

There’s the C-class solar flare which is the smallest. They only have a few noticeable effects on earth.

The largest solar flare is called the X-class solar flare. They have the biggest effect on earth causing radio blackouts across the whole world and longer radiation storms than the M-class would cause located in the upper atmosphere. They can be labeled by numbers to describe more of their strength like X2 would be twice as powerful as X1 and X3 would be three times as powerful as X1.

On record the biggest solar flare ever recorded was on April 2, 2001. It hurled about 7.2 million kilometers per hour, but not in the direction of the earth. It was classified as an X17. The flare disrupted the electricity grids of Canada.

A Coronal Mass Ejection (CME) usually coincides and causes solar flares. CME is an explosion of plasma and magnetic fields from the sun which can lead to the release of electromagnetic energy which is a solar flare. The CME sends electric currents near-earth which emit magnetic field vibrations that turn into something called a geomagnetic storm.

Geomagnetic storms have a duration of 2-8 hours and a recovery period which can vary from 8 hours to 7 days. These storms don’t always happen, but if the exchanged energy from the solar wind into the parts of space surrounding earth was enough, geomagnetic storms will occur.

Severe CMEs can cause electricity shortages and power outages.

CMEs can also cause auroras in the sky that are often seen in the north and south poles. They are caused by the charged particles in a CME that reach areas near-earth and cause intense lights.

On Thursday, October 28, when the X1-Class solar flare shot out from the sun it caused a strong radio blackout affecting South America. The flare peaked at 11:35 a.m. EDT according to the U.S. Space Weather Prediction Center. The solar flare caused a geomagnetic storm classified as a G3 in the upper atmosphere which ended up causing the beautiful auroras seen on October 30 just before Halloween.

If you want to track solar activity visit this website: https://www.spaceweatherlive.com/en/solar-activity.html