And The Reintroduction of Yellowstone's Iconic Gray Wolves.

Established in 1872 as the world’s first national park, Yellowstone is 3,471 miles (2,221,766 acres) mostly within the state of Wyoming but it also slightly stretches over the borders of Montana and Idaho. It has been home to many Native American tribes for 11,000 years and was also settled by European American pioneers. The park is also home to about 394 animal species of mammals, reptiles, amphibians, fish, and birds.

Yellowstone is diverse with many different biomes, from rugged mountains like Druid Peak and Amethyst Mountain to vast valleys and grasslands like the Lamar Valley and Thunder Basin National Grassland to the luscious forests such as the Shoshone National Forest and Bridger-Teton National Forest. There are also many iconic bodies of water such as Yellowstone Lake which is 139 miles wide, Yellowstone River, and Lamar River.

Because Yellowstone is an active supervolcano, it is famous for its many geysers, especially one of the most famous; Old Faithful. When Old Faithful erupts, it can spew water from 100 feet to 180 feet for as long as 5 minutes. The Yellowstone supervolcano is known as Yellowstone Caldera. When Yellowstone Caldera erupts, the ash and smoke cover all of North America. This is highly dangerous as smoke carries microscopic crystals that can make it difficult to breathe and tear your lungs. It also leaves you with a runny nose and burning eyes, and can even give you lung and heart disease.

Smoke from volcanoes causes massive air pollution, releasing not only ash and dust but also carbon monoxide, and sulfur dioxide as well as many other extremely dangerous gases. When these gases mix with moisture, oxygen, and the sun, it creates smog. Smog is intense air pollution that makes it very difficult to breathe and see because it is a mixture of smoke and fog. Luckily, Yellowstone doesn’t seem to show signs of eruption any time soon but there is still volcanic activity beneath the ground’s surface of the park.

Yellowstone National Park has a very diverse ecosystem, one that every plant and animal is linked with each other. If you take one organism out of place in the system everything will collapse.

We can see examples of this in 1926 when every gray wolf (Canis lupus) that lived in Yellowstone was hunted down to extinction. This was because wolves were considered pests to farmers and ranchers, and hunting wolves in the park were legalized then. The government was also involved with the killing of wolves by operating predator control programs. This was the start of the downfall of Yellowstone’s ecosystem.

In Yellowstone, the diet of a wolf mainly consists of elk. When the wolves were wiped out they left little to no predators for the elk to maintain their population. The elk began to eat too much of the park’s vegetation, making it harder for other animals to find shelter and food. Those animals either left or died. With the herbivore population scarce, this left many predator species like mountain lions and bears with no food so the predator population also lowered drastically.

Due to the disappearance of wolves, rivers were also affected. How? Beavers primarily chewed down willow trees. Willows were also dying off as well because of the exploding beaver population, meaning fewer willow trees for the beavers. So, beavers left the region. Over time the dams they built collapsed causing redirecting of the rivers and flooding.

Other reasons for small animal populations to lower were because when the wolves disappeared the coyote population skyrocketed. Wolves are the main predator for coyotes in Yellowstone as they are harmful towards wolf pups and are considered scavengers, so they will feast on whatever the wolves leave behind.

During the years 1995 and 1996, a whole seventy years later, thirty-one gray wolves from Jasper National Park in Alberta, Canada were reintroduced to Yellowstone. This major success not only brought back wolves to the park but also many other species of plants and animals. The wolves began to lower the overpopulated elk and coyote numbers making it so that the vegetation can grow back more easily and have the small prey that coyotes hunted, able to thrive.

With the vegetation growing back, a wider variety of prey animals returned, so even though the coyotes’ numbers were lowered by the wolves that made it so it gave other animals a chance to survive but also the chance to become a meal for the coyotes so that they can survive as well, thus maintaining the coyote population and even more so maintaining the entire ecosystem.

This shows that conservation is a high priority within the park and the world. Conservation affects how ecosystems work, how plants and animals live, as well as makes the world a safer place to live in as it affects us, humans, too.

Yellowstone National Park does just that. The park puts a lot of time and money into ways that can help Yellowstone as well as the world. For instance, though Yellowstone is the largest consumer of energy in the National Park Service (NPS) and mainly get their energy from fossil fuels and coal-fueled power plants, they reduce the amount of energy they use by making facilities more energy efficient. In fact, Yellowstone has several small renewable energy systems operating such as a portable trailer with a kW (kilowatt) solar panel array that engages with 90% of electrical necessities at Bechler, a 44kW solar panel system that operates 100% of electrical necessities at Lamar Buffalo Ranch and uses hybrid vehicle batteries, and a micro-hydro generator that is located in Mammoth Hot Springs produces about 1.4 million KW-hours annually. Because of this, about $95,000 in 900 metric tons of greenhouse gas emissions and electricity costs are saved each year.

The Park is planning to reduce the overall consumption and use of potable water by using water-smart design and technology. The reason for this is that over 250 million gallons of water are being used for washing, flushing, and hydrating every year. Yellowstone is even replacing faucets and toilets with more coherent models. Smart controllers were installed in the historic lawns of Mammoth Hot Springs. These controllers help reduce irrigation water by 30%. That is 3.5 million gallons per year.

Yellowstone lowers the consumption of fossil fuels by using fleet vehicles. They decrease the size of their fleet and replace the existing ones with fuel-efficient vehicles. Only the most efficient vehicles are chosen for each job. About 19% of the fleet vehicles chosen for work are hybrid. The park helps educate employees and visitors about fuel-efficient driving and maintenance practices and is also partnered with Yellowstone-Teton Clean Energy Coalition on several fuel-reduction projects such as an idle-reduction campaign. Yellowstone also partnered with Michelin and recorded savings on gas expenditure by using experimental fuel-efficient tires on park vehicles. The park has a rideshare program that helps reduce the consumption of fuel and air pollution, and also reduces parking necessities, and enhances safety. This has saved employees money since 1998.

Yellowstone National Park even deprecates waste by purchasing environmentally friendly products. To be compliant with EPA (Environmental Protection Agency) propositions, they purchase items with recyclable or biodegradable materials, no pernicious elements, and fundamental packaging. These products require minimal conductivity during production and transportation. Yellowstone also lowers single-use plastics. Employees that work at the park use office paper that is made up of 30% post-consumer recycled matter, and also use paper towels that are made of 100% recycled paper.

Yellowstone does way more than just protecting the natural elements. Of course in a national park the wildlife must also be protected. Everything from Yellowstone’s iconic gray wolves, to elk, to grizzly bears, to moose and bison, all the way to many species of trees to the sage, everything is connected in an ecosystem.

To protect these animals doesn’t mean to save them from being injured or orphaned. That would just be rehabilitation and not necessarily conservation. Rehabilitating animals would interfere with natural selection, how do you think they got in that situation anyways? Natural selection specifically picks out the strongest healthiest animals to survive and to pass on their genes to the next generation. Animals who don’t meet that criteria will die either from sickness, killed by another animal, or starvation. Of course there are many other possibilities to an animal’s fate. The animals who do meet that criteria though will have a more likely chance of having a successful hunt, surviving extreme weather conditions, and to reproduce. That’s the whole point of natural selection. It’s what affects the behavior of wildlife. If you were to rehabilitate animals, especially in a place like a national park where human contact towards animals is extremely rare and illegal, chances are that animal will end up in the same spot. If they happen to reproduce they will just give their weak genes to their offspring who are likely to not live a full healthy life. It is meant to conserve that untouched wild in the land and the life that lives within that land. If people just kept rehabilitating animals that would narrow the food down for predators. 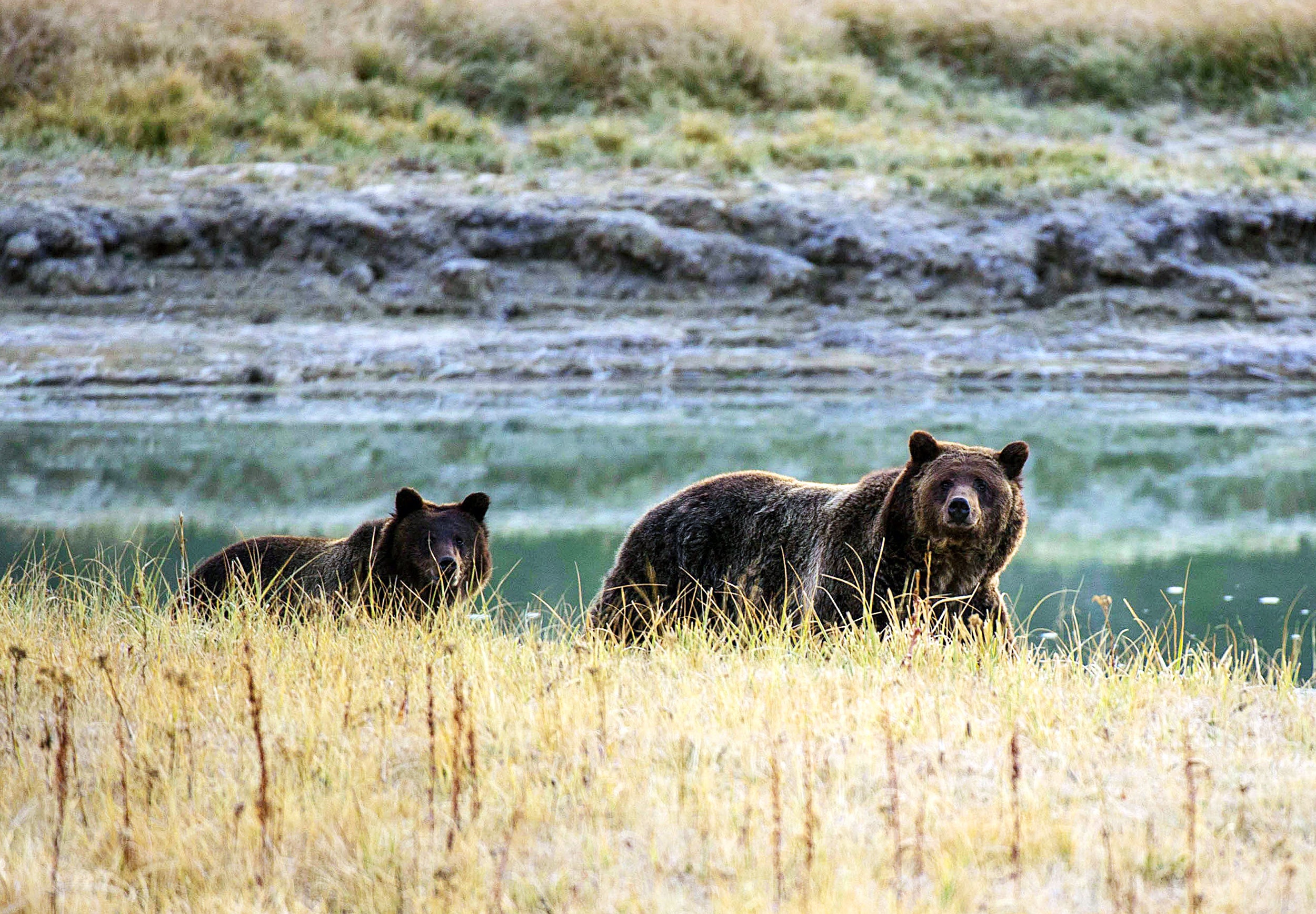 Other ways Yellowstone protects the way animals live in the park is by not allowing humans to have contact with animals, including birds. This means petting them or feeding them. This puts the animal in danger. It puts the animal in danger by making them comfortable around people. If animals are comfortable around people that raises the chances of animals getting hit by cars as they will be desensitized to vehicles. People who feed animals can make them dependent on people as they find them as a good food source. This can get rid of their natural instincts to find food on their own.

The park also prohibits hunting, though hunting is allowed anywhere outside the park. So if an animal ventured outside park boundaries that would make it perfectly legal for the hunter to kill the animal, of course as long as the hunter is hunting legally. Hunting is also a form of conservation, as it prevents overpopulation.

Most of the world is inhabited by humans leaving less of that truly wild expanse. National parks help conserve that rare feature of the planet, and without national parks more animals and plants wouldn’t be able to find a sanctuary to thrive in. National parks give them that benefit while using it for our own benefits too. It even makes the planet a safer place for humans and animals to coexist in.