"If you want to be part of the club, you gotta be insecure and unstable in some way"

I don’t think that many people take mental illnesses seriously enough. Many people don’t understand what many illnesses are or how they affect the human mind. I think the internet is to blame for this lack of awareness and misunderstandings.

Various social media trends have made it popular to be mentally ill. Based on the amount of time that the youth of today use the internet, I think it has made a significant impact on how it is seen. I think this is partly from where the stigma around it comes from.

With the birth of social media, new communities began popping up all over the place. A new social media website, Tumblr, was founded in 2007, and was home to many growing subcultures. In 2013, with the platform growing quickly, an area of the platform began growing where people would glamorize the idea of having a mental illness. Some people felt accepted and that it was somewhere comfortable that they could share their feelings, but the idolization of something that is inherently negative was not good. “Swedish film student Hampus Leijon, 22, who started using the site at 16, while experiencing depression… ‘Just making it seem like — depression, suicide, this is cool. If you want to be part of the club, you gotta be insecure and unstable in some way’” (TheRinger). Inaccurate portrayals in social media, including television, made it seem more appealing than it actually was.

This idea spread across the internet, turning mental illnesses like depression into more of an aesthetic/trait rather than something that should be taken seriously. The idea, since its inception, has been found on most social media platforms, most notably on Instagram, TikTok, and on Twitter. The idea has been around for about a decade and its impact can still be seen today. You can look on the internet and find all sorts of individuals faking mental illnesses or disabilities to gain respect or popularity. Some treat them like labels or tags to add to themselves.

People looking from the outside of the internet may never have heard of any of this. This type of behavior is isolated to the internet, and not found much elsewhere. “The problem is snowballing, and since there is little control over what is being posted… that share and promote a fake image of some very serious and delicate mental health issues” (Jadayel, Medlej). Being mentally ill or having a disability is not desirable, and should not be normalized to such a degree that you find millions of people with it, just because they wanted to fit in with others or that they find it attractive. Constant viewing of this type of metal online can send subliminal messages to the person “in the objective of convincing individuals about a particular product/thought… manipulating their thoughts without them being aware of it” (Jadayel, Medlej).

The promotion of negativity needs to end.

Constant exposure and desensitization of these topics makes it so much more difficult for people that genuinely are not in a good place, to reach out and ask for help: “57.2% of adults with a mental illness received no treatment. Over 26 million individuals experiencing a mental health illness are going untreated” (MHA). People who are suffering don’t want to be associated with the people who fake it, nor do they want to be thought of in a negative way, although these are just a couple reasons. 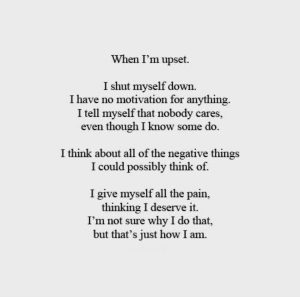 The internet’s effects on mental health is all too apparent in today’s youth. Suicide has quickly become the second leading cause of death for those ages 10-34 (National Center for Injury Prevention and Control 2018). Depression, anxiety, and other disorders are becoming more prevalent as the days go by. Increased time inside and usage of the internet is adding to this problem too.

One of the best things you can do is limit your time and exposure to social media and pay attention to what you consume on the internet. I am not saying that people should not talk about depression or anxiety on the internet, but the promotion of it is not okay.